A lecturer at the Department of Pure and Applied Zoology, Federal University of Agriculture Abeokuta has disclosed that the consumption of insects like grasshoppers is a very good sources of nutrients such as protein, vitamins, fiber and mineral contents for man.

The lecturer, Professor Adewumi Idowu, made this known while delivering the 50th Inaugural Lecture of the University, titled “The Animal in Lens of a Zoologist”.

The Professor of Zoology defined zoology as a scientific study of animals, beginning from the simplest animal, which is the protozoa to the most complex, which is mammals, while animal physiology refers to the science that deals with the analysis of the functions of living organisms that involves the application of physical and chemical methods to the study of biology, among others. 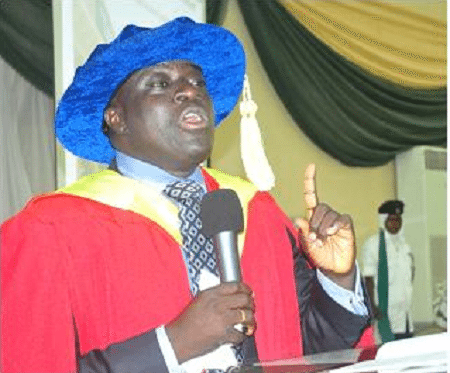 Prof. Idowu stressed that physiology was such a diverse subject that should be exploited for national development rather than being misconstrued unnecessarily because “there seems to be a parallel line in our concept and direction as animal physiologists”.

The lecturer, who is also a member of the Zoological Society of Nigeria and the Nigerian Entomological Society, stated that despite the vast and complex nature of animals, the typical zoologist still faced the reality of seeing representatives of the animals in the practical classes that could rather help him/her to unravel the mystery behind the complexity.

He disclosed that there were some missing gaps in the study of the physiology of the African grasshopper (Zonocerus Variegatus), that his research work had been able to address, hoping that the remaining areas would be addressed so as to bring about better agricultural yield for the country, as there is “lack of proper co-ordination between the scientists, either in the laboratory or the field and the applied scientists, who are in regular contact with the farmers, who bear the brunt of this pest”.

He made it known that even as grasshoppers, even though they’re re characterized by several features including having an offensive body odour, they always remained highly nutritious.

Idowu called on relevant authorities to embrace the practice of entomophagy, which simply means ‘insect-eating’, by making insects one of the common delicacies that could be comparable with other conventional and unconventional protein sources.

Your comments are appreciated, let us know your thoughts by dropping a comment below