The Federal Government has appointed Dr Dayo Oladebeye as the sixth Rector of the Federal Polytechnic, Ado-Ekiti (FPA).

The appointment of Oladebeye was disclosed in a statement made available to the News Agency of Nigeria (NAN) in Ado-Ekiti.

According to the ?statement, Dr Oladebeye was appointed ?on March 1, in a letter signed by the Minister of Education, Malam Adamu Adamu. 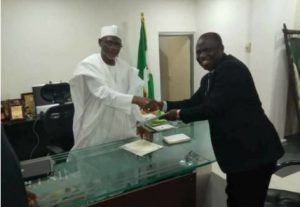 Adamu, while handing over the appointment letter to Oladebeye, and Chairman of the Governing Council of the Federal Polytechnic, Chief Austin Edeze, advised the new rector to rule with the fear of God.

NAN reports that Olade?beye was the acting rector before the new appointment, following the expiration of the tenure of the immediate past rector, Dr. Taiwo Akande.

Oladebeye, 55, holds a Ph.D in Mechanical Engineering. He had served three times as Head of Department, Director of Olusegun Obasanjo Centre for Engineering Innovation, Dean of the School of Engineering and Deputy Rector for about four years.

He is also a COREN registered Mechanical Engineer, a widely published academic, and at present, the National President of the FPA Alumni Association and the first Alumnus of the Polytechnic to become its Chief Executive. (NAN)