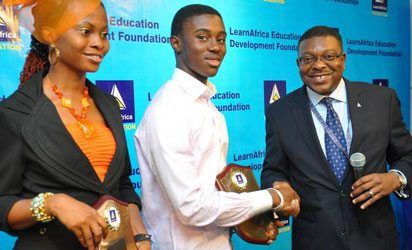 Little did the quartet of Chizoba Obasi, Sandra Anazor, Oghenefego Ahia and Aina Feyisayo know that the 2012 National Examinations Council (NECO) examination where they came best in the country will attract national recognition and rewards from LearnAfrica Plc (formerly Longman Nigeria Plc).

Describing the yearly excellence awards as “the first of its kind in scope and coverage,” as it covers all states of the federation and the Federal Capital Territory, the Chairman, Board of Trustees of LearnAfrica Education Development Foundation, Chief Emeke Iwerebon, said it was instituted by the Foundation to underscore the importance of excellence in education to national development.

He added that the prizes were designed to encourage hard work, recognize diligent scholarship and promote healthy competition among students, as well as reward teachers for their dedication, and identify some schools that have become the beacons of excellence at the senior secondary education level.

Besides, the schools of winners also received free library books from the Learnafrica Foundation, while 37 teachers each received N40.000 and a certificate for their outstanding contribution to the success of students in their school at the NECO June-July 2012 SSCE.

Two teachers, Mr Jacob Daudu and Mrs Anthonia Mamah, also received the star prize of N100,000 and a plaque each at the national level, having been nominated by their schools as outstanding in their contributions to the success of the top two candidates. According to Iwerebon,  111 students, 97 schools and 37 teachers at the state level were awarded for distinguishing themselves in the June/July 2012 NECO Senior School Certificate Examination (SSCE).

“The LearnAfrica-NECO Excellence Awards simply reinforces the drive for excellence already embedded in our books. We are confident that reading LearnAfrica’s tried, tested and trusted books, is a sure path to academic excellence,” he said.